Why Copper is more preferable in Earthing ? Reddish metal (Copper) is a noble metal that occurs naturally in its elemental form. And also copper is a versatile metal not only its unique properties of high electrical conductivity and high thermal conductivity but combination of these and other properties of copper. Copper is suitable for using in most of the earth electrode applications, except for acid, oxygenated ammoniac or sulphurous conditions. This is not only for high conductivity, but also for good corrosion resistance.

As per standard IS 3043, tests would be taken in wide variety of soils and it show that, the specimen of 150 mm x 25mm x 3mm of different material (copper, galvanized steel and mild steel without coating) has been buried in variety of soil for 12 years.

Copper whether it is tinned or not, is entirely satisfactory because the average loss of specimen in no case not exceed 0.2 percent per year.

Test showing the average loss of galvanized mild steel to be little superior to copper not greater than 0.5 percent per year.

Similarly, Copper earthing conductors, in general, need not be protected against corrosion when theyare buried in the ground if their cross-sectional area is equal to or greater than 25 mm2. So therefore, compare the average lossess among this material copper has high corrosion resistance.

Copper can be readily joining by the following methods

Copper is both malleable and ductile metal, which means that it could be stretched to a good length without breaking or weakening it. They can be bended to fit around corners. The reddish metal stands well on this parameter. 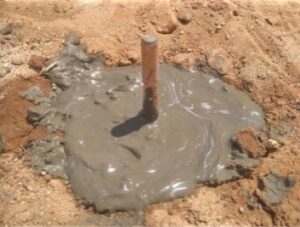 Copper can be easily shaped into pipes, flats and wires and the copper pipes are light weighted because they have thin walls.

As per UL 467. the melting point of copper conductor is 1083°. so it can be used for high temperature application. So, therefore copper has high temperature tolerance than other material using in earthing

Copper can be easily combined with other metals to make alloy and it is non-magnetic and non-sparking material.

Copper is not only having lower resistance but also combination of unique properties at economical prices.

Every grounding system need lower resistance value as possible. Lower the resistance better will be the performance of system and also easy for channelizing the fault current in to general mass earth without cause any damage.