There are no methods or devices capable of modifying the natural weather phenomena to the extent that they can prevent lightning discharges. Lightning flashes to, or nearby structures or lines connected to structures are hazardous to people, to the structure themselves, their contents and installations as well as to lines. This is why the application of lightning protection measures is essential.

Protection angle method is suitable for simple shaped buildings. It also has limitations on the height of the air terminal. The mesh method is suitable where plane surfaces are to be protected. Whereas rolling sphere method can be used in all the cases.

The radius of the rolling sphere is corelated with the peak value of the current in the lightning that strikes the structure,

Where,
I - peak lightning current in kA.
The point on which the sphere touches the structure will be exposed to lightning strikes and at such points protection by an air-termination conductor is required.

Let us consider a rod air terminal placed at the top of a building. The protection provided by the air terminal as per rolling sphere method for different classes of LPS are shown below.

From the above image, we can find that the protected region varies for different classes of LPS and different heights of air terminal. The air terminals should be placed in such a way that the sphere doesn’t make any contact with the structure to be protected. 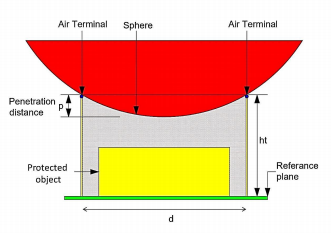 The penetration distance of the rolling sphere below the level of conductors in the space between the conductors can be calculated by using the below formula (IS 62305-3).

From the above analysis, we can conclude that the distance between the air terminals(d) in rolling sphere method depends on two factors.