Down conductor system for Lightning Protection 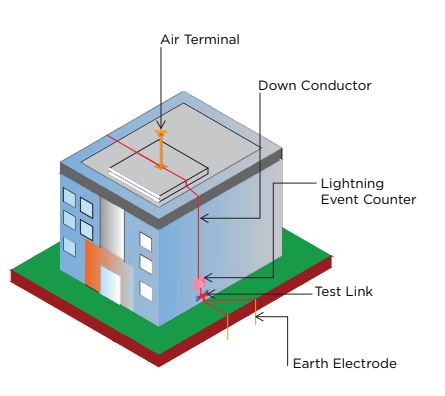 The main and most effective measure for protection of structures against physical damage due to lightning is considered to be the lightning protection system (LPS). An external Lightning Protection System ( https://www.cikit.in/overall-lightning-protection-system/ ) is intended to

In this article we have explained about down conductor system for Lightning Protection.

If the Lightning protection system is isolated from the structure to be protected, it is called Isolated LPS. The down conductor for an isolated LPS can be positioned as follows,

A down conductor should be installed at each exposed corner of the structure and as far as practicable, they form a direct continuation of the air-termination conductors. Down conductors are installed in such a way that they provide the shortest and most direct path to earth.

Down conductors, even if covered in insulating material, shall not be installed in gutters or water spouts. The effects of moisture in the gutters lead to intensive corrosion of the down conductor.

The down conductors of an LPS not isolated from the structure to be protected can be installed as follows,

When the distance between from down conductor to a combustible material cannot be assured, the cross section of the steel or thermal equivalent conductor shall not be less than 100mm2.

Natural components as down conductors:

The following parts of the structure may be used as natural down conductors.

- The metal installations provided that electrical continuity is ensured and the materials have the required dimensions.
- The metal of the electrically continuous reinforced concrete framework of the structure.
- The interconnected framework of steel structures.
- The façade elements, provided that they have electrical continuity and the metal sheets or pipes thickness shall not be less than 0.5mm.
The materials used for air-termination and down conductor system should have the capacity to withstand the heavy impulse current. IEC 62305 suggests the configurations and minimum cross-sectional areas of the materials to be used for these applications and the details are as follows. 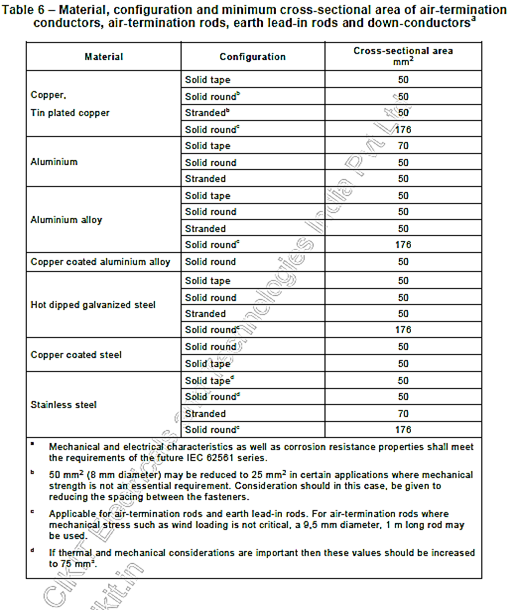