Earthing is the process of connecting the current carrying and non-current carrying metal parts of an electrical system to dissipate the currents to the ground. The main objective of earthing is to ensure the safety of operating person & equipment, reference for the system voltage, dissipating the impulse lightning current and discharge the static charges.

The Current dissipation from a electrode is assumed to be in the form of concentric circles with the potential decreases gradually away from the electrode. The highest voltage will be observed in the portions adjacent to earth electrode.

IS3043 explains about the variation of earth resistance value with respect to variation in length and diameter of the electrode. The curves shown below are calculated for electrodes of 13, 25 and 100mm diameter respectively in a soil of l00Ω.m respectively. Change of diameter has a relatively minor effect and size of pipe is generally governed by resistance to bending or splitting. It is apparent that the resistance diminishes rapidly with the first few feet of driving, but less so at depths greater than 2 to 3 m in soil of uniform resistivity. 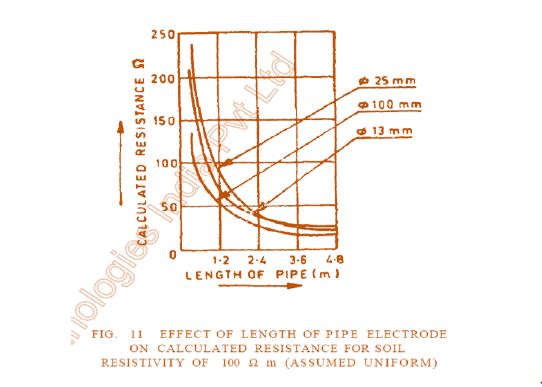 From the graph, we can find that, if the diameter of the ground rod is increased, this offers very little change in the area of the hemispherical shells and hence little changes in the resistance. But if the length of the electrode is increased, there will be a considerable reduction in the resistance value. The variation of dissipation of current from earth electrodes of different dimensions are shown below. The first circle near the electrode will be at very high potential and the potential of circles reduces gradually as me move away from the electrode.

If the required earth resistance value could not be achieved with the help of single earth electrode, multiple electrodes shall be installed and connected together in parallel for achieving the desired value.

However, when one takes a closer look, it becomes evident that the spacing between the ground rods may have some impact on the combined resistance. In the extreme case if two electrodes are superimposed to one another, the resistance of two electrodes will be similar to that of one electrode if they are installed totally adjacent. In practice, there has to be a mutual separation of at least equal to the driven depth of electrodes and little more is to be gained by separation beyond twice the driven depth. Hence for an electrode of 3m length, the separation distance between adjacent electrodes shall not be less than 3m. 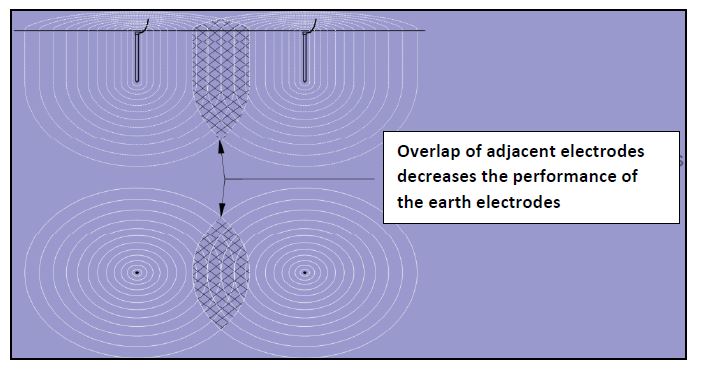