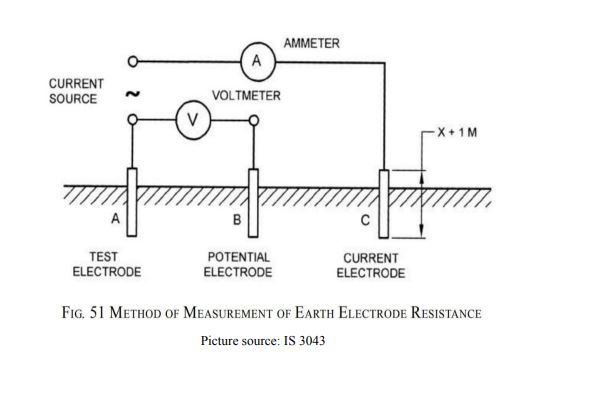 The ground mounted distribution substation comprises of pin type insulators, Air Break switch, lightning arrestor and distribution transformer. All those equipments and their metal structures should be earthed properly in order to ensure safety of human beings and equipment.

Here also three electrode potentiostat test procedure will be used but the positioning distance of probes should be changed. The current probe should be connected in straight line in order to achieve reliable readings. 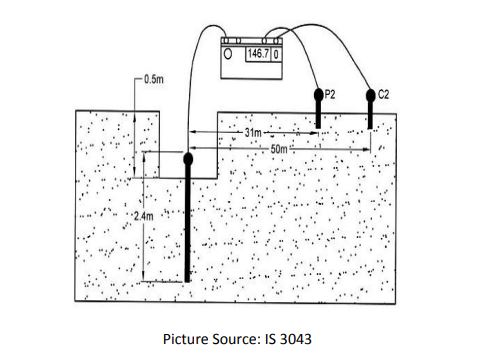 IS 3043 suggests that for small earth electrode system the distance between earth grid and current probe should be 50 m and the voltage electrode shall be placed at 61.8% of 50m which is 31m. The measurement arrangement is shown above.

The distances should be increased when the earth electrode system having medium size of electrode. In order to confirm the accuracy, the voltage probe shall be moved to 50% percent and 70% of current probe distance and the corresponding readings are also tabulated.

IS 3043:2018 suggests Fall of Potential - Slope test to measure the earth electrode resistance for the large earth grid system where the electrical centre of the earth system is unknown. The electric field in the soil at substation and transmission line tower site conditions will be very high. Hence, placing the spike outside the influence of such fields might not be possible at some conditions and hence IS3043 suggests this method for such site conditions.

Substations are one of the major parts of electrical network. Any abnormality in substation will lead to isolation of all the areas which are under the control of that substation. IS3043:2018 has explained about the earthing for such substations under Clause 25.

In general, earthing installations will be required at power stations and substations for:

1) The neutral points of each separate electricity system which has to be earthed at the
power station or substation.
2) Apparatus framework or cladding or other non-current carrying metalwork associated
with each system, for example, transformer tanks, power cable sheaths.
3) Extraneous metalwork not associated with the power systems, for example boundary
fences, sheaths of control or communication cables.
The earth mat serves as a common ground to all the metallic structures and devices located
in that substation. Since it forms the large earthing grid its resistance value will be
measured by slope test.

The transmission tower comprises of insulator, the transmission lines and other components of tower. All those equipment and metal structures should be properly earthed by methods like using earthing electrodes of rod / pipe, burying the conductor, using counterpoise wires. 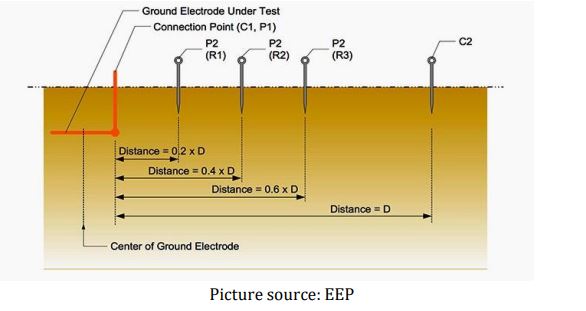 Measured resistance will be noted as R1, R2, R3. By using this formula we can find
rate of change of slope (µ).

IS 3043 recommends this test to check the true resistance value obtained from slope test and 61.8% test.

This method shall be used to verify the values obtained from the previously explained methods. 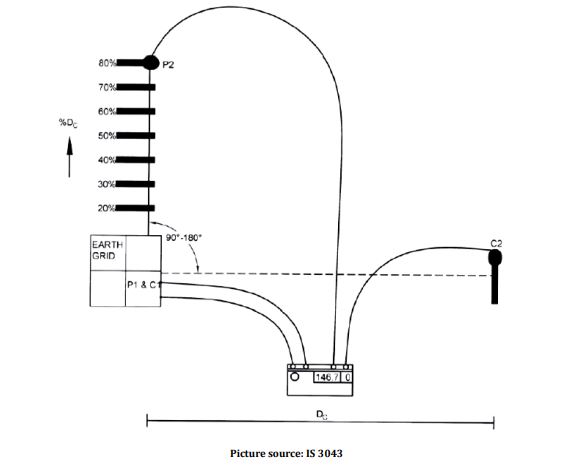